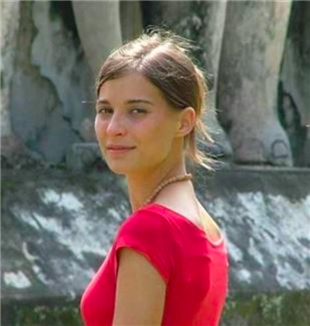 The following article was published on October 13, 2015, on it.clonline.org. We repropose it today in light of the formal edict signed on July 2 by the Vicar General of Rome, in which Chiara was declared under formal investigation for beatification.

“After the resurrection, Jesus could no longer be seen. What could be seen was life in those He had gifted it to. It could be seen in Peter, John, James … people whose lives had been changed. They were the same, but not exactly. We see Chiara’s life in Enrico, in Francesco, and in many people whose life was changed by her witness.”

Chiara Corbella Petrillo lives on in the eyes of those who were able to share in her life as a mother and a wife. Chiara passed away at twenty-eight, due to an illness she did not wish to treat to allow her son Francesco to be born. Her husband, Enrico, her spiritual director, Fr. Vito, her many friends from Rome and Assisi, and her family, were the authors of Piccoli Passi Possibili (Small Possible Steps), a collection of witnesses proposed on September 15, 2013, at a recurring meeting in Assisi, to better learn about Chiara's story.

Published after her biography, Chiara Corbella Petrillo: A Witness to Joy, this text prefaced by journalist Costanza Miriano provides additional details and reflections on “a story that teaches a different logic, the Christian logic,” in Simone’s words. Its title, Piccoli Passi Possibili, refers to the method Chiara and Enrico learned from the Franciscans in Assisi during their engagement: “To reach the Lord, you shouldn’t run, nor should you walk too slowly: you have to walk at a pace that is steady, constant, and, most importantly, present. Tiredness overcomes you if you focus on the past or the future, but if you walk thinking only of the small possible steps you can take now, you will at some point reach your destination and say, ‘I’m already here! Lord, thank you, this is incredible!’”

Thanks to these small possible steps, the cross revealed itself to be increasingly joyful, and life to be a continuous discovery of grace. Before she died, when speaking to the hundreds of people attending a pilgrimage to Medjugorje, Chiara said, “Lord, I am here begging for the grace to live Grace,” even before healing. The Lord granted her request because, as Fr. Vito said, “God fulfills His good projects, His promises, through ways you cannot know. God never promised Chiara and Enrico healthy children […] or a twenty-fifth anniversary. […] God made some promises to Chiara and Enrico on their wedding day; […] He promised them a full life, but this can be reached through ways only He knows.”

The first to be born in the “house on the rock” were Maria Letizia and then Davide Giovanni; they both died shortly after their birth due to serious malformations. In the same house came the “dragon:” a rare and aggressive form of tongue cancer, discovered while Chiara was pregnant with Francesco and only treated after she gave birth. Their efforts were in vain: Chiara passed away on June 13, 2012. Everything, however, was a chance for the couple to meet Jesus; they never complained, and they never despaired.

The sacrament of marriage is crucial to understand Enrico and Chiara. Enrico said, “A few months before she died, while she was already a terminal patient, she said to me, ‘The one I feel saddest to leave is you, Enrico, not Francesco. I chose you, and I wanted to grow old with you.’” He then added, “If you love your child more than you love your spouse, you are not living up to the promise you made to Jesus on the altar: to love your spouse above all.” Their friend Cristiana explained, “Chiara was very neat: there was the Lord, there was herself, there was Enrico, and, that way, everything acquired its true rhythm. Until the end.”

Today, Chiara has many children in Italy and abroad. Her tomb in Verano di Roma is never missing flowers. Christ made Himself present in the eyes of a twenty-eight-year-old woman who was able to say “yes,” and in the hearts of those who knew her. There’s nothing left for us but to beg for “the grace to live Grace.”