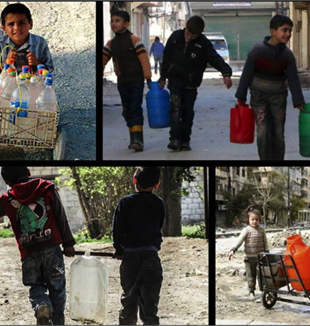 "You cannot lose your home during the Jubilee.”

For some time in the Latin Catholic parish of Saint Francis in Aleppo, we have received warnings of a new and formidable problem, in addition to the countless others already present. Some banks, finding themselves in difficulty after five years of war, began to comb through their list of debtors: the long list of families who, having received loans, mortgaged their house as collateral. From that moment on, there was no respite for us.

At first, we tried to understand the extent of the families involved and how many of them were Christian. The list, unfortunately, turned out to be quite long: hundreds and hundreds, as many as 450 Christian families of the various rites in the city.

Months ago a panicked Syrian Orthodox family came knocking on the door of our monastery. Their eyes revealed a great sadness and could not hide the fear. The father was the only source of income with a monthly salary of 20,000 Syrian pounds that at today’s exchange rate, is less than 30 Euro (or around 35 dollars). They frantically told us about the large debt they had accumulated with the bank since in these long years of war they could no longer afford to pay the monthly installments. The bank took the case to court, which ordered them to pay off the debt, otherwise their house would go up for auction.

I told them that the Jubilee has always been a special time of grace, in which all are treated fairly, given the opportunity to regain lost property and personal freedom. So the Lord would never allow them lose their family house or to find themselves out in the street: anything could not happen in this Jubilee year, and then somehow the debt would be addressed.

While talking to that first family, I was reminded of the beautiful story of a Patriarch of Alexandria, John the Merciful who, in order to help the poor, sold the chandeliers and all the furnishings of the Curia. After several years of unlimited generosity, another poor man came knocking at his door, but he had nothing left to sell. John then had the man wait while he went to the market to sell himself into slavery and thus raise some money. Good thing that, while John was up for auction, a wealthy Christian passed by who recognized the Patriarch, ransomed him and gave him back his freedom.

Moved by the true story of this holy Patriarch, and faced with the uninterrupted flow of families who continue to knock on the monastery door, I answer with a smile: “We have many rugs and furnishings in the monastery that we can sell, before we have to sell … ourselves!”

As I write these lines, already 200 families have passed through our parish office.

We have set up a “Rapid Response Team”, equipped with a lawyer, to effectively respond to this new emergency. In the first months of 2016, 115 families have obtained debt relief in the amount of about the 900 euro (about 1,000 dollars per family). The blessing and consent of their pastors, who warmly praised the initiative and courage, have been of great comfort to us.

But the possibility of losing their homes now looms over hundreds of Christian families. Since there is no work in Aleppo, there is no family income. Most of the women have already sold what little gold they owned in order to meet the daily need for food.

A young husband, and father of a beautiful baby girl, whose family has benefited from our help, thanked me with tears in his eyes, confiding to me how the help of the Church has given him a “new life.” Seeing all his debt satisfied was, for him and for his family, like living the experience of the ancient people of Israel, being liberated from slavery in Egypt and crossing the Red Sea. This is the way we catch a glimpse of and, perhaps allow many families of Aleppo to experience, the power of the Resurrection.

With the first group of families who received helped we gathered in the monastery living room to pray together, giving glory to Him who continues to work out, in the reality of every day, our deliverance from sin and death.

One father who could not fathom the gratuitousness of the gift, asked me how he could return what he had received. I then explained that he had experienced only a taste of the gratuity of Christian charity, which has no limit or condition, being made in the image of what Christ offered for us on the Cross: His Own Life.

“If you want to give something back,” I told him, “make sure that the flame of charity which has reached you is always burning in your heart, manifesting itself both in thanksgiving to the Lord, and in concrete action toward others, especially the ones who live under your roof. “

Previously published in Avvenire on May 8, 2016.