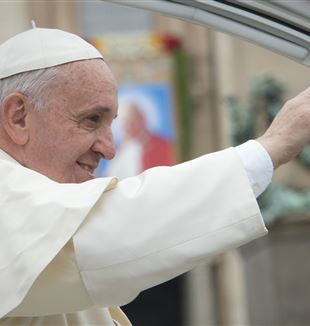 Deng Xiao Ping said that one could not yet formulate a definitive judgment on the consequences of the French Revolution, because only two centuries had passed. This statement came to mind, somewhat paradoxically, as I was reading the extraordinary Apostolic Exhortation, Evangelii Gaudium, proposed by Pope Francis to the entire Church and all of humanity. Truly, the impact of Bergoglio’s unexpected election and of his preaching is a historic fact whose dimensions are difficult to evaluate. Among the many striking things in this work, it is worthwhile to reflect on the second and fourth chapters, which, starting from the main topic of evangelization, take a deeper look at Catholic social doctrine and touch on all the key concerns of today’s world.

The Pope starts from the spirit of the times, not to write a sociological analysis but “something much more in the line of an evangelical discernment” and in the second chapter he traces the social “context” in which the Church acts. Today’s world, seen by Bergoglio, is experiencing a “turning point in its history” due, above all, to the progress of knowledge and information, and yet it is becoming a crueler world: in his words, “such an economy kills.” “How can it be that it is not a news item when an elderly homeless person dies of exposure, but it is news when the stock market loses two points?” In his Exhortation, he calls it “an economy of exclusion and inequality” in which “human beings are themselves considered consumer goods to be used and then discarded.” He underlines how this is new in history: the least important, those who suffer most from this aseptic, anesthetized cruelty of the culture of well-being, are not oppressed, but cut out: “those excluded are no longer society’s underside or its fringes or its disenfranchised–they are no longer even a part of it. The excluded are not the ‘exploited’ but the outcast, the ‘leftovers.’” The poor of today’s world, “the excluded,” Pope Francis writes, “are still waiting.”

Certain aspects of this situation are indeed new. At its basis is a mechanism of growth, economists would say, that creates inequality. “While the earnings of a minority are growing exponentially, so too is the gap separating the majority from the prosperity enjoyed by those happy few,” writes the Pope. “This imbalance is the result of ideologies which defend the absolute autonomy of the marketplace and financial speculation.”

Like Joseph Stiglitz
It seems like we are hearing echoes of the most recent controversies among great economists. Nobel Prize winner Joseph Stiglitz dedicated one of his most recent publications, The Price of Inequality, to this very issue, the deformation of an unprecedented model of development that creates wealth but only for a very few, increasing the distance between nations and between the rich and poor within nations. At the same time, Bergoglio’s Exhortation is a heartfelt, vigorous, and yet almost elementary presentation of the Church’s social doctrine: “Money must serve, not rule! The Pope loves everyone, rich and poor alike, but he is obliged in the name of Christ to remind all that the rich must help, respect, and promote the poor.” Economics and finance must return to an “ethical approach which favors human beings.”

This is not an economic policy, as Bergoglio himself acknowledges: “I have not sought to offer a complete diagnosis, but I invite communities to complete and enrich these perspectives on the basis of their awareness of the challenges facing them and their neighbors.” His is a powerful stimulus to reflect and develop ideas, but above all practical behavior on the part of communities and individuals. In the fourth chapter of the Exhortation, his reflection on “the social dimension of evangelization” further develops some thoughts, incisively underlining the relationship between faith and social commitment.

Here, the richness of the text is such that we must limit ourselves to highlighting only a few passages. His line of thought is rooted in the proposal that the Kingdom of God on earth has historical and social consequences. “It is about loving God who reigns in our world. To the extent that He reigns within us, the life of society will be a setting for universal fraternity, justice, peace, and dignity.” And again, “True Christian hope, which seeks the eschatological kingdom, always generates history.” Therefore, Christians and the Pastors of the Church not only have a right to speak, but offer an indispensable contribution to the vicissitudes of humanity. At this point, Bergoglio quotes the saint whose name he has taken and the ultimate “social justice Blessed.” He asks, “Who would claim to lock up in a church and silence the message of Saint Francis of Assisi or Blessed Teresa of Calcutta?” And he continues: “An authentic faith– which is never comfortable or completely personal–always involves a deep desire to change the world, to transmit values, to leave this earth somehow better than we found it.”

"Why go first to the poor? Because they are “those who cannot repay you.”

Without Exception
Then he dedicates many rich pages to focus on what he calls “the inclusion of the poor in society,” with passages that show clearly how the Christian faith values the poor. The Church “has to go forth to everyone without exception,” certainly. “But to whom should she go first? When we read the Gospel we find a clear indication: not so much our friends and wealthy neighbors, but above all the poor and the sick, those who are usually despised and overlooked, ‘those who cannot repay you’ (Lk 14:14).” These are the ones who demand total, gratuitous love. It is a kind of test of the way we look at others. For this reason, “There can be no room for doubt or for explanations which weaken so clear a message. Today and always, ‘the poor are the privileged recipients of the Gospel.’” Similarly, “For the Church, the option for the poor is primarily a theological category rather than a cultural, sociological, political, or philosophical one.” The Pope reminds us: “God shows the poor ‘His first mercy’” and “this option–as Benedict XVI has taught–‘is implicit in our Christian faith in a God who became poor for us, so as to enrich us with His poverty.’” He does not offer sociology here; this issue concerns faith and conscience.

Other things immediately strike the reader, as well, such as his prayer for politicians in paragraph 205: “I ask God to give us more politicians capable of sincere and effective dialogue aimed at healing the deepest roots–and not simply the appearances– of the evils in our world! Politics, though often denigrated, remains a lofty vocation and one of the highest forms of charity, inasmuch as it seeks the common good.”

“Giving priority to time means being concerned about initiating processes rather than possessing spaces.”

The Weeds Among the Wheat
His words on some constant tensions present in every social reality deserve more attention. First, he states a principle that seems to merge into the realm of Physics: time is greater than space, in the sense that space is the limitation, while time is the final horizon. “People live poised between each individual moment and the greater, brighter horizon of the utopian future as the final cause which draws us to itself.” This is “a first principle for progress in building a people.” He adds, “This principle enables us to work slowly but surely, without being obsessed with immediate results.” And here he opens a line of reasoning that seems to recall another bipolar tension, one Fr. Luigi Giussani identified years ago as that between hegemony and presence, because, as the Pope writes, “giving priority to time means being concerned about initiating processes rather than possessing spaces.”

After a splendid quotation from Romano Guardini, he follows with a quote referring to the Gospel: “The parable of the weeds among the wheat (cf. Mt 13:24-30) graphically illustrates an important aspect of evangelization: the enemy can intrude upon the kingdom and sow harm, but ultimately he is defeated by the goodness of the wheat” that reveals itself over time. And he revisits other, very familiar principles, like: “realities are more important than ideas” and: “the whole is greater than the part.”

Michael Gerson wrote in The Washington Post, commenting on the Exhortation: “Francis is demonstrating that Christian faith is not an ideology; it stands in judgment of all ideologies, including the ones we justify in the name of freedom. This should not be surprising during Advent, given the revolution that arrived, unexpectedly, among the poor and humble.”

It was no coincidence that Saint Francis was the one to invent the nativity scene. He set it up in the village of Greccio, Italy, to remind the people of his time that poverty was the fundamental characteristic of that extraordinary story in history. The first pope to ever take Francis’ name as the successor of Peter writes today, “The entire history of our redemption is marked by the presence of the poor. Salvation came to us from the ‘yes’ uttered by a lowly maiden from a small town on the fringes of a great empire. The Saviour was born in a manger, in the midst of animals, like children of poor families; He was presented at the Temple along with two turtledoves, the offering made by those who could not afford a lamb (cf. Lk 2:24; Lev 5:7); He was raised in a home of ordinary workers and worked with His own hands to earn His bread.”