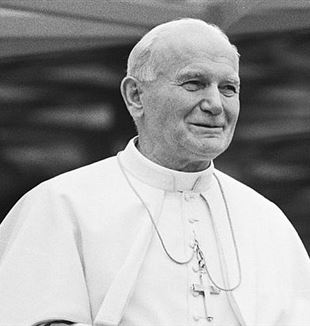 Years ago, when I was teaching theology, I had the opportunity to ask Pope John Paul II about his views on the social doctrine debate in the Church. This debate continues today, with the views of Pope Francis, so I thought it would be interesting to revisit what John Paul II said to me. He was really very brief: “Tell your students that if they want to understand my views they should study the theater plays I have written. For social justice, the play is Our God’s Brother.” From that time on, each time he’d see me, he’d ask me how my students liked the plays.

This play was finished in 1979, while he was Pope–an important resource for a study of the Pope’s social doctrine. But no one seems to consider it as a serious source of theological testimony. The Pope beatified and canonized the main character of the play and now he is about to be canonized himself. One modern saint writing about the experience of another and it is ignored as a source of theological knowledge? What is it then? A pious story about modern spirituality?

In any case, Our God’s Brother is about Adam Cmielowski (1845-1916), Polish partisan fighter and artist. After seeking shelter from the weather in an apparently empty building, Adam instead discovers that it is full of angry, cynical homeless persons–an encounter that completely changes his life. The play is a reflection of the struggle within Adam’s soul of how to respond justly to the poor’s needs, both at the level of the individual and at the level of the distribution and use of power in a truly human society. Some of the characters are fictional personifications of different responses to the problem of poverty; others are real historical persons. They were all artists, so the discussion begins with the social responsibility of art. For our purposes, it is the debate between Adam and three characters that interests us. (Remember that this is really a discussion within Adam’s own soul.)

First there is Max, defending an individualist, subjectivist view. He divides the human race into two kinds of persons: an exchangeable man and a non-exchangeable man. The first is the person involved in social relationships; the second is the real self, living in isolated loneliness. Adam rejects this view of a non-exchangeable man as the real self, but neither can he support the view of life in the safe routine of social life as revealing the real self. Such a view of man without interiority, he argues, is “an escape to little islands of luxury” where we feel safe in social structures that protect the individual, whereas this security is really an illusion that blinds us and prevents us from seeing the plight of the poor and hearing their cry for justice.

Then there is a character called The Stranger, a revolutionary who believes that it is the anger of the poor that will break the circle of poverty in the name of the justice being denied to them. Adam does not refute the just anger of the poor but claims that The Stranger exploits this anger. Instead, he says, all of us should be guided to recognize a need within us that is deeper and wider than our material poverty, called a poverty of values. These values reveal the goods for which our soul searches and which cannot be obtained by the path of anger, but only of love.

Finally, there is a character called The Other, who stands for rationalism—a purely intellectual understanding of the world as it is, without sharing its burdens.

After that discussion, Adam sees a poor man standing against a lamp post in a cold, dark street. This time, Adam understands this encounter as a summons. He now sees that the poor bear an image we are called to surrender to— the image of God in the poor and suffering, the image of Christ also present in us, bound to Him.

But The Other cannot see the poor man (intellectualism cannot grasp the personal —revealing that Adam himself has escaped the “tyranny of intelligence.” Although he sees what the sacrifice of love entails in responding to the poor, he knows that only in this response is he “not alone” because “I am letting myself be molded by Love.”

Later on, The Stranger objects that the poor will not follow him, but he replies, “No, I will follow them.” Do you think Pope Francis preaches a Gospel different from the thought of Karol Wojtyla?