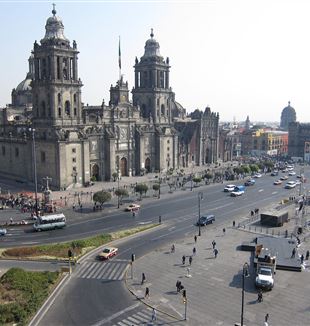 “Povera voce” was the song that began the evening presentation of Why the Church? in Mexico City on October 28th, in the Auditorium of the Encuentro University Center, with over 350 people present–university students, white collar workers, blue collar workers, representatives of educational and cultural institutions, a few politicians, and figures from the ecclesiastical world.

The entire CL community of Mexico City and environs mobilized to make this a missionary gesture, to offer everyone the richness of the gift that the encounter with Fr Giussani’s charism represents for each of them, and for the entire Church.

Cardinal Norberto Rivera Carrera, Archbishop Primate of Mexico, opened his presentation of Fr Giussani’s book by saying, “We are here for a Presence,” making it clear right away that his presence and the entire gesture could not be reduced and lived as a social gathering or a simple cultural act.

The Nucleus of the Christian Experience
He continued, drawing from the Holy Father’s words in his recent letter to Fr Giussani, underlining how Fr Giussani’s entire educational effort is aimed at “bringing people to discover how Christ is present… recognizing this decisive nucleus of the Christian experience, of which many are unaware or which many take for granted as an obvious premise.”

On the basis of this conviction, said the Cardinal, the Archdiocese of Mexico City has launched a “permanent Mission… because you can not take for granted that the inhabitants of this great city have encountered the living Christ by the fact that they are baptized or participate in some religious practices.”

“This book of Fr Giussani’s,” continued the Cardinal Primate, “represents a great gift for the Church, and not only for the ecclesial movement he began. This work has every right to belong in the classic literature on the Church, and already belongs to the theological treasury.” It is not an arid, scholastic manual; reading it, one has the impression of being before “a very personal work that shows us it is not the fruit of work behind a desk, but of a Christian experience, of grace, of the author. Fr Giussani, Cardinal Rivera emphasized, offers us with this book “a living letter of his ecclesial experience, a kind of lived ‘gospel,’ in which the heart of the Christian, the heart of a priest who is guide, pastor, and father to many believers, opens and reveals itself to his readers, without renouncing depth of thought and theological precision.” He then underlined a few aspects of the book, above all where it marks the danger of clericalism in the Church, and where it indicates that the historical modality through which the living Christ can be communicated today is the way of the encounter, of an exceptional encounter.

A Fact, not an Ideology
The words of Fr Giussani’s Letter to the Holy Father resounded as well: “The capital problem for Christianity today, as Your Holiness suggestively announced, right from the programmatic encyclical of your Pontificate, Redemptor Hominis, is that Christianity is identified with a Fact–the Christ Event–and not with an ideology.”
On stage with the Cardinal were Pablo García, of the National Center of the Movement, Fr Fidel González, and Jesús Carrascosa. Fr. Fidel underlined the methodological concern that always accompanies the work of Fr. Giussani. It is not enough to announce the truth, but the road is needed to reach it. For this reason, Jesus told us, “I am the Way, the Truth and the Life.” Fr. Giussani indicates in the Church the method for knowing Christ present today.

Jesús Carrascosa spoke directly and vividly of his experience of encounter with Fr. Giussani, in a period when Christianity was conceived as something outside daily life, as León Felipe said, speaking of Christ, “He came, showed us our task, and left.” They were times of strong ideals, but ones that seemed to have nothing to do with Christ and, worse still, with life in its fullness. “When I encountered Fr Giussani, I loved life,” said Carras, expressing the experience of many of those present. Giussani, concluded Carras, wrote about what he lives, not a theory born behind a desk. Fr. Giussani doesn’t invent anything new; he just lives what he writes and, in this way, makes it something that can be encountered by man today.

A Good Presence
Cardinal Norberto Rivera Carrera closed his comments with thanks. “At the beginning, we said that we are here to celebrate a good Presence, and so the last word must be one of thanksgiving: thanks to God our Lord, for His grace, thanks to the Virgin Mary, our Mother, who gave us her Son; and thanks to those who with their word and with their experience of faith, like Fr Giussani, are in the history of the Church, in the past as in the present, an unfolding of the action of God through His grace. We can also borrow these words of thanks from Don Quixote: “Because for the most part, those who receive are inferior to those who give, and thus, God is above all, because He is the giver above all, and what man gives cannot correspond in equal measure to what God gives, because of the infinite distance; and thus, in a certain way, this scarcity and limitedness are overcome (and fulfilled) by thanksgiving” (M. de Cervantes, Don Quixote, II, 58).