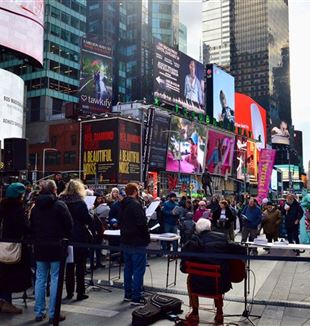 A group of friends were very provoked by what the Pope asked of us at the audience on October 15 in Rome; to participate with him in the prophecy for peace. We discussed it and wondered what this proposal meant.
We had to ask ourselves about the meaning of the word peace, seemingly very simple, but almost impossible in the current context. It seemed to us that the Pope was talking about something else, a different concept of peace than what we had in mind: an unconditional and non "political" peace.
Thus we decided to organize a public event and thought there could be no better time than Advent to announce this prophecy of peace, and no better place than Times Square for this announcement.
We thus gathered on Saturday, December 17, in Times Square for an afternoon of Christmas carols and reflections on peace by Pope Francis and Fr. Giussani with 70 friends from the community. We printed a booklet to hand out to people passing by so they could follow along or even just pick it up and take it home.
Those who stopped by were infected by this joy and asked us who we were! We could not answer with words, but through the shining faces of those who were there singing, that was
what attracted them. At a time when anyone is protesting against anything, a group of happy people singing for peace, unconditionally, attracts and corresponds. At the event, in spite of communiqués sent at the last minute, even the press came, a sign perhaps that happiness and praying for peace is news today.