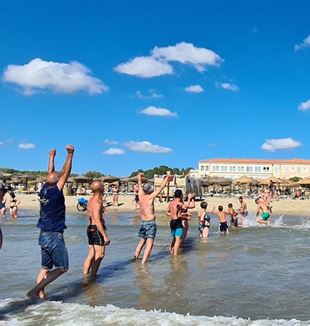 Someone named it "the Rosary vacation” because it all started more than a year ago, with our first connections via Zoom for the novena to Saint Joseph and the recitation of the Mysteries. It was proposal that gradually attracted both friends and people we did not know. "It was the end of March last year," says Paola. "I had Covid and I was locked in my room for 45 days. One night I got a text from a colleague: 'Join the Rosary on Zoom'." Paola logged on and the first few times she remained hidden with her camera and microphone off. "Then I shyly introduced myself. And from there, I always showed up. I cannot say what it was, I cannot explain it in words, but now I am here and I am happy to be here."

Calambrone, in the province of Pisa, a hotel three hundred meters from the beach. They arrived on Thursday afternoon, some people came from Crema and Cremona, others from Varese and Milan, and many from Stagno Lombardo. Some were lifelong friends, others had only met during the pandemic, and others had never seen each other before. Believers and non-believers, from CL and not from CL. And not one of us had their life "in order". Three days spent together with the desire "to find out what might have happened that was even more surprising among us," says Beppe. It was not a gamble in the dark, because "we had already seen, in the past months, what had made an Other possible with our yes." The common thread of the vacation was "When I see you, I see hope", a phrase from Julián Carrón's message for the Macerata-Loreto Pilgrimage. But is this really true? Are there really faces, stories, gazes that make people say that?

The days began with the Angelus, then games for adults and children at the beach. It was such a sight that it made those around us lift their heads up from their deck chairs. Some people came towards us and watched us playing – scenes they had never seen before. On Friday evening, a meeting with Andrea Mondini, a friend of Enzo Piccinini: "Today, for me, Enzo has your face, that of my wife, of Carrón and of the movement.” The only effort that is asked, says Mondini, "is to give up our comfortable life and go to see where that beauty that Enzo never gave up happens.”

Saturday morning was, in fact, dedicated to beauty. The visit to the Basilica of San Piero a Grado touched everyone's heart. Mariella Carlotti, dean of the Conservatorio San Nicolò in Prato, explained the greatness of that place: the discovery, under the ciborium of the church, of ancient apses built around a stone that confirms that the Apostle Peter celebrated mass there in 44 AD, as soon as he landed in Italy. And then the cycle of frescoes painted in the nave, with some moving episodes from the life of Saint Peter. Mariella's finger indicated where to look and her voice recounted touching events. The same happens in life: trusting and following someone who knows where beauty is always worthwhile.

Read also – The promise of belonging to each other

On Sunday morning, before returning home, people shared their impressions of the vacation. "I came here because I thought I would find out who I am," said Morena, another friend met via Zoom. "But the thing that struck me most is that I am most interested in finding out who you are. With your stories, your being… Each one of you is a magnet for me. I want to fully understand what it is that attracts me in such an incredible way." Marco perceived the factor that unites them all: "Even though we have different stories, we have the same heart and the same desire for happiness". Elisa agreed with him, "there is a good for which we are made and which we always wait for. No matter how fulfilled you feel, the heart never stops asking." The familiarity with which her friends from Varese were greeted struck her. "It was as if they had always been friends." Renato said that it was not the words that surprised him, "but the gazes. It was a way of life that involved my wife and me and drew us in right away." Andrea calls it "a superabundant correspondence. We saw it here and this is what rekindles the heart." Emanuele quoted the poet Gibran: "’When love beckons to you follow him, though his ways are hard and steep.’ This is what happens to me. This love that can be seen in all of you, which is sometimes tiring for me, is the most fascinating thing about my life." Silvia is surprised by how "some people have looked at my son Alessandro,” struck by the way she looks after him. He is fifteen years old, and has been disabled since birth, unable to speak or walk. A seaside vacation was chosen to allow him and his parents to be there. "Those who have the face of Christ for me today are these faces, but in particular that of Alessandro," said Beppe. "He is the person who is most needy, but who is able to move mountains."