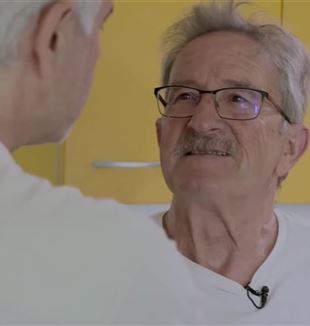 On Friday, December 4, together with the GS community of the Sacro Cuore high school in Milan, I met with Mikel Azurmendi, a Spanish sociologist and anthropologist, author of the book L’abbraccio [The Embrace], on Zoom. During the meeting, I was very struck by how Azurmedi spoke about forgiveness, saying that it means giving oneself freely to the other. Someone who has been an atheist for 50 years must be true and sincere in what he says.

In answering a question about the reasonableness of the certainty of faith, his answer was enlightening: "A serious man believes. An illusion cannot produce all this good and beauty. When you love do you think that love is an illusion? No, so it is not."

I had sent him these questions: "Wonder is an aspect that comes up several times in the interview. What is a characteristic of your encounter only at the beginning, or does it still characterize your journey today? How is it possible for something already known to continue to arouse wonder, particularly in a situation like this in which it is easy to become flattened by the situation we are living?" He replied, "That is the key question! If you answer it, you are saying what the Church is. Wonder is in front of something unusual that you come across and admire. For example, you see it in your parents, in a friend, in a teacher. You are amazed by the way they act and you want it for yourself. You want the life you see in those people for yourself. That is why you want to change. Jesus had many encounters: with the apostles, with Zacchaeus. This chain of encounters has continued until now. Each encounter is a surprise that reproduces the face of Jesus today. It is an experience made possible again in history as an act of love."

Read also - "My dialogue with God, with the respirator on"

Mikel amazed me because with a disarming simplicity he made me understand what Christianity is. It is not a reality relegated to the life of Christ two thousand years ago, but the concatenation of encounters inflamed by Jesus’ love that change your life and amaze you, which you find as a surprise in the other.

Meeting him via Zoom was no less than meeting him in person, because it was even clearer to me that he loved me, and that Jesus, as Mikel himself said, was present even in that meeting. As he said, "There is much more in my book than what I thought was there, there is the meaning that you have perceived and from which this Zoom derives. God is here, in this meeting we are having now."