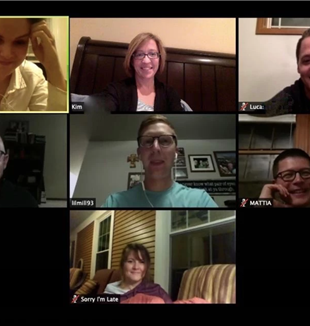 South Dakota is far away from most people in the country, and our people live a great distance from each other. We refer to Minnesota and are often encouraged to travel to participate in gestures of CL. It is a sacrifice that requires an affection for others that we often don’t possess, an affection that moves us to do the work of driving.

And so the proposal of studying the Risk of Education by means of ZOOM and Google Docs struck a chord for many of us. A desire arose to do this work that would gather us without the need for traveling a distance. Over two dozen people from South Dakota signed up. It was a great surprise to see a few communities all gather in a home and do the work together. The beginning was blessed with great enthusiasm, and an affection was borne in me for these people, locally, regionally, and across the country, as I saw faces and read contributions that enriched my understanding.

The first half of the meetings, I gave it my all. Then the enthusiasm waned. The second-to-last meeting I wasn’t able to make because of my mother’s death--and it is understandable to have to take a step back at a time like that. But when a friend contacted me the night of the last meeting about going to Handel’s Messiah, I gave an immediate “yes” to the evening of music.

The afternoon of the concert I was on a phone call in which we were discussing how necessary it is to follow commitments through to the end, to give your whole self in order to make a proper judgment about something corresponding to the heart. It struck me that I had failed to do this with the Risk of Education work.

Here I was, having contributed on the first ZOOM call, excited about the way our rural communities were able to be introduced to the larger charism, and daily doing the work and contributing to the Google Doc, but when something more exciting arrived, I wasn’t able to adhere to the path that I had agreed to take. I went to the evening of music with a great awareness that, if I could do it all over again, I should and would say “I already have a commitment.” I was surprised at how certain I was of this.

The Messiah was different than I thought it would be. The first movement was not all that exciting, and I decided I would leave after the second part. As I sat in the pew listening to the second part, it occurred to me that I was doing the same thing I had done with the Risk of Education: I start something with great enthusiasm, and in the middle, when it lulls, I leave or choose something more exciting instead of going the distance in order to make a proper judgment of the gesture’s goodness for my life. I almost didn’t see that I was going to cut out again. With this awareness, I decided I would stay to the end no matter what.

To my astonishment, the third movement was incredible! At the end, I stood up with a smile and filled with joy; I was so grateful for what I received and, more importantly, aware that when I make a commitment to a path God has put in front of me, I must trust the process and see it through to the end--not because it is expected of me or I have to make a good impression or I must moralistically complete the things I start, but because I have affection for myself. I want to be willing to sacrifice my life in ways that allow obedience to Christ to overcome the fickleness of my feelings along the journey.

It is true that we need an affection for others in order to go the distance in our rural communities. But I require an affection for myself to stay true to the course Christ has called me on.