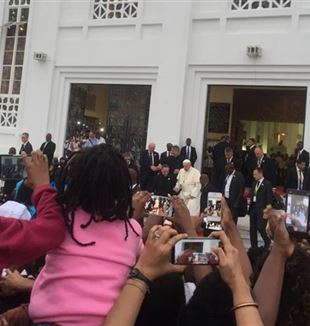 I've lived in Mozambique for seven years with my husband and children. When I heard that the Pope was coming to Maputo, to my city, I realised that I could not miss this event. Until three weeks ago, however, I didn’t know if I would make it: I was in Italy for the birth of our third child, but I did everything I could in order to return to Africa, without even knowing if
I would have been able to partake in any of the events with him.

Until yesterday, however, I didn't understand why I cared so much. Telling my daughters about the Pope’s visit, Teresa, 4 years old, said to me: "Oh good! Is he going to have dinner with us?” How could I not have taken her to welcome him? Yet my judgement remained weak, it was only little more than an intuition.

Yesterday, outside the Cathedral where the Pope met the clergy, we found ourselves in a small and varied group of friends and acquaintances: me, my husband, our children, our babysitter and some friends of the movement. There were also some Italian colleagues and friends, who are not “practising”, but who, after seeing him for the first time, could not stop following his every movement.

I kept asking myself why I was there waiting for Francis and I thought about the many accounts that I had heard in the last few days. The friend who, with a simple heart, had immediately accepted the invitation to volunteer during the visit and who told me of how she was deeply moved when she opened the doors of the Maxaquene stadium for the Pope. And Matheus, who hasn't come to any of the gestures of the movement for years, also a volunteer, could not help but say to an Italian journalist, who interviewed him, that he was of Communion and Liberation. Moreover, the colleague who, after deciding to adopt her boyfriend’s faith and convert to another church, saw that nothing could satisfy her heart, and returned to the Catholic faith, with a greater awareness than before.

A message from our Portuguese friend Fr. João, from Lisbon, through which people first met the movement, has also helped us to become more aware of what we were living as a community, despite our limitations and our divisions. It has reminded us of who we are whilst "you embrace each other, and if necessary, forgive each other and reconcile each other".

And then I looked at our babysitter, Mimí, who was next to me. Originally a Catholic, she had converted to the faith of the man who had got her pregnant and then abandoned her. She was there, all eager to see the Pope with the same simplicity as my daughters. So much so that she asked me to help her find a pass in order to see him again the next day, at the stadium.
In front of all this, I realize that the presence of Jesus is imposing, overwhelming, magnetic. But if you don't remain close, even the most powerful magnet loses its full effect.

It suffices to read the messages of other friends of the community, in our WhatsApp group, after the various events of the visit. Carolina, who has been in Mozambique for a year working with AVSI, writes: “My parents came to visit me in these days and we decided to attend the mass in the stadium. We weren’t very convinced, frightened by the organisational chaos that we would have faced. But how could I have missed it? The fact that the Pope was here was too great a sign for me: through him, Christ is here for me and for them”. Michel and Cheila, newlyweds, were also there for the Pope: “We feel so blessed…”. Beny, who had not been involved with CL for many years, now, man and father, writes: “Meeting the Pope was a unique moment, which drew the face of Christ closer to me. It was an occasion to meet friends of the movement, for that new beginning to which Carrón calls us. I now feel the urgency to re-trace the path of the movement”. And the words of Atanásia: “When the Pope passed by and looked at us, I felt looked upon and favoured by Christ. I now find within me the desire, more than before, to cultivate and live our companionship”.

I too, in front of the Pope's blessing through the window as he passed by, found myself re-iterating my "here I am", those words that Francis, on the feast of the Immaculate in Saint Peter's Square in Rome, had invited us to say every morning. A "here I am" that in recent months has accompanied me daily and that I wish to repeat not only to the Pope, but to Jesus, every morning, even in front of these unusual faces, different, full of limits like me, but transfigured by the presence of Another who comes to meet me now. And to whom I wish to remain attached, like a magnet.