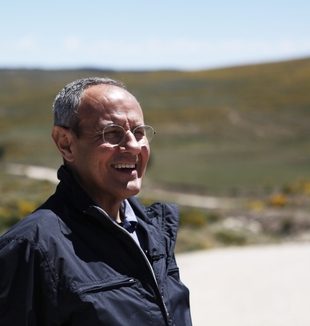 Fr. Carrón was born on February 25, 1950 in Navaconcejo (Cáceres) in the western region of Spain. At a young age, he entered Madrid’s Conciliary Seminary, where he received his high school education and formation in theology. In 1975, he was ordained a priest and the following year, he received his degree in Theology, with a specialization in Sacred Scripture, at the Comillas Pontifical University. At this time, he began to further pursue his studies on the Bible and the Gospels in Washington, D.C., and in Jerusalem. Subsequently, during the nineties, he gave lectures on the historicity of the New Testament around the world. From 1991 to 1997, he taught a class titled "Man's Religious Sense," organized by the Diocesan Delegation for University Pastoral Services at the Complutense University in Madrid. During this period, he was also head of the Minor Seminary. In the mid-eighties, after having completed his doctorate, Fr. Carrón started to work at the San Dámaso Faculty of Theology in Madrid, where he taught as a professor on the New Testament, and until 1994, he was also the rector of the Colegio Arzobispal de la Inmaculada y San Dámaso.

Nueva Tierra and the Movement
Soon after his ordination, in the mid-1970s, he joined a group of young priests of various parishes in Madrid whose shared experience and friendship was dedicated to the education of youth. Theirs was an authentic and true fraternity that was formed by two teachers who met while in seminary and who studied subjects associated with famous figures in Catholic theology such as Guardini, Ratzinger, and Von Balthasar.
This entity came to be known as Nueva Tierra and it led to the formation of an association for youth. Then in 1982, Nueva Tierra came to know of CL, which had been present in Spain for some time. Some years later, Carrón met Fr. Giussani in person. In 1985, Nueva Tierra merged with Communion and Liberation. (cfr. “Noi siamo quel che siete voi,” [We are what you are] Tracce n.8/2010).
With time, the friendship between the two priests grew stronger. This bond took a new form when, in 2004, Carrón moved to Milan at the request of Fr. Giussani to share the responsibility of leading the Movement.

Leading the Movement
After the passing of Fr. Giussani in 2005, in March 2005, Carrón was elected President of the Fraternity of Communion and Liberation by the Central Diaconia. His office was confirmed in three successive elections: in 2008, in 2014 and in March 2020, for a new six-year term. On November 15, 2021, following the General Decree on Associations of the Faithful promulgated by the Dicastery for the Laity, the Family and Life, Fr. Carrón communicated his decision to resign from his position in a letter to the Fraternity, in order to immediately facilitate the process of change required of international associations of the faithful recognized by the Holy See.

On August 26, 2005, he was received for the first time in a private audience with Pope Benedict XVI. A few months later, in October, he was appointed by the Pope to participate in the Synod on the Eucharist.
The following spring, on June 3, 2006, he spoke in St. Peter’s Square during Pope Benedict XVI’s meeting with ecclesial movements, also attended by members of Communion and Liberation.
The year 2007 marked the 25th Anniversary of the Pontifical Recognition of the Fraternity of Communion and Liberation, which took place on February 11, 1982. To honor this occasion, on March 24, the Spanish priest led the entire Movement on a pilgrimage to Rome to attend an audience granted by Pope Benedict XVI. The following year, Carrón was nominated Consultor of the Pontifical Council for the Laity and later the Consultor of the new Pontifical Council for Promoting New Evangelization.
In November 2010, he spoke at two important theological conferences. The first one, in Moscow, was organized by the Orthodox Church; the second one, in Madrid, was dedicated to the topic of the presence of Catholicism in society. Two years later, the Catholic University of America conferred on him an honorary doctorate in Theology “For his distinguished service in the theology field, especially in Sacred Scripture, and as a leader of an international ecclesial movement recognized by the Pope.”

With Pope Francis
On October 11, 2013 Fr. Julián Carrón is received in private audience with Pope Francis. On October 16th, Fr. Carron writes a letter to the Fraternity and to the entire Movement of Communion and Liberation inviting everyone to test whether each community of our Movement, “makes visible the essential, that is, Jesus Christ?” This theme reemerged at the audience in which Pope Francis received CL in St. Peter’s Square on March 7, 2015, on the occasion of the 10th anniversary of the death of Fr. Giussani. That same year, in November, Carrón was the keynote speaker at the Fall Conference at the University of Notre Dame, where he gave a lecture titled “The Truth Will Set You Free.”
In April 2016, following another private audience with Pope Francis, Fr. Carrón addressed the Fraternity in a letter: “I don’t think there’s anything that can help us more than constantly striving to identify with the witness that the Pope offers us each day.”

Publications and public meetings
In September 2015, Rizzoli published La bellezza disarmata, a collection of essays and lectures that discuss the major topics of contemporary life, anything from the family to the economic crisis, as challenges to and opportunities for a form of Christianity with a sincere desire to reach the human heart in a new way. This volume, presented in dozens of events in Italy and abroad (and published in various languages including English under the title Disarming Beauty), has provided many opportunities for dialogue with various public figures and protagonists of society from every imaginable worldview. Fr. Carrón has regularly made public speeches and given interviews to members of the media around the globe.

In the spring of 2018, Edizioni San Paolo published Fr. Carrón's book La voce unica dell'ideale. In dialogo con i giovani. The book was published in light of the forthcoming Synod of Bishops on "Young People, the Faith, and Vocational Discernment."

In April 2020, Reawakening Our Humanity. Reflections in a Dizzying Time, by Julián Carrón, was released in ebook format. This is a book-interview, edited by Alberto Savorana, in which, starting from the irruption of Covid-19 into everyone's life, Carrón describes how it offers a great possibility for the rediscovery of humanity.

Subsequent publications include: The radiance in your eyes. What saves us from nothingness? (2020), Education. Communicating One's self (2020), as a contribution to the event "Rebuilding the global education pact" convened by Pope Francis, and Is there hope? The fascination of a discovery (2021), where the author addresses one of the most widespread questions in a period dominated by uncertainty.

Fr. Carrón is currently a professor of theology at the Università Cattolica del Sacro Cuore in Milan.
Photo GalleryPhoto gallery of Carrón and the Movement
Photo GalleryMarch 7, 2015, Audience with Pope Francis
Interviews
Articles
Speeches and Interventions
Letters and Messages
Videos